What is the Texas Hog Depredation Act?

Texas today has well over 4 million wild hogs, and these creatures are in direct competition for limited resources against other native wildlife including many endangered species. Not to mention the fact that they are the thing for nightmares for farm owners who often find themselves keeping up at night to kill a few hogs who wander on to their property.

Research has shown that feral hogs tend to destroy the ecosystem by mainly over foraging, wreaking havoc with upsetting creeks, streams, and destabilizing the soil by wallowing. All this damage continues to stress an already destabilized ecosystem and makes it hard for us to protect species which are barely surviving. That’s why the Texas Hog Depredation Act couldn’t have come any sooner.

What is This Act all About?

The 86th Texas Legislature recently passed a law which now allows feral hog hunting without a license so as long as it is on private property. The Texas Parks and Wildlife Department has said that the law is in effect and under SB 317, anyone with the permission of the property owner who is either a Texas resident or not can hunt feral hogs, and they can do it without having to obtain a license.

However, it is essential to clarify that it is still a violation to hunt on somebody’s land without their prior permission. That said what property owner in Texas will not like you killing a couple of unwanted and destructive hogs on their property? 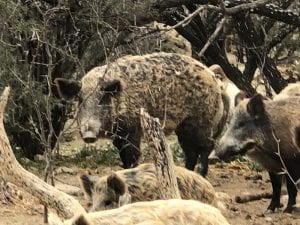 Now this only applies to landowners who want to charge for feral hog hunting on their property. The owner will need to get a hunting lease license which, like all other licenses will have to be issued from the TPWD.

The license now does away with the reference to depredation, and now it applies to any and all feral hogs in Texas regardless of if they are damaging property. The law for the time being only applies to hog hunting on private property that’s why a license is still required if hunters want to hunt on public land. They (hunters) will also need hunter education.

Now this is yet another law which will affect hunters and anglers in Texas introduced by Rep. Terry Canales which allows licensees to use a photograph of their physical license to verify that they have a hunting license. However, this is only possible for game that does not require having a tag like dove hunting. It also does not apply to hog hunting on public land.

Now is the Best Time to Go Hog Hunting

Whether you enjoy shooting pigs from a helicopter or using a good old crossbow now is the best time to do it. Not to mention that it is free and so you can go hog hunting any time you want and thanks to the Texas Hog Depredation Act, having a friend or family member with some land and hogs will pay dividends for hunters.