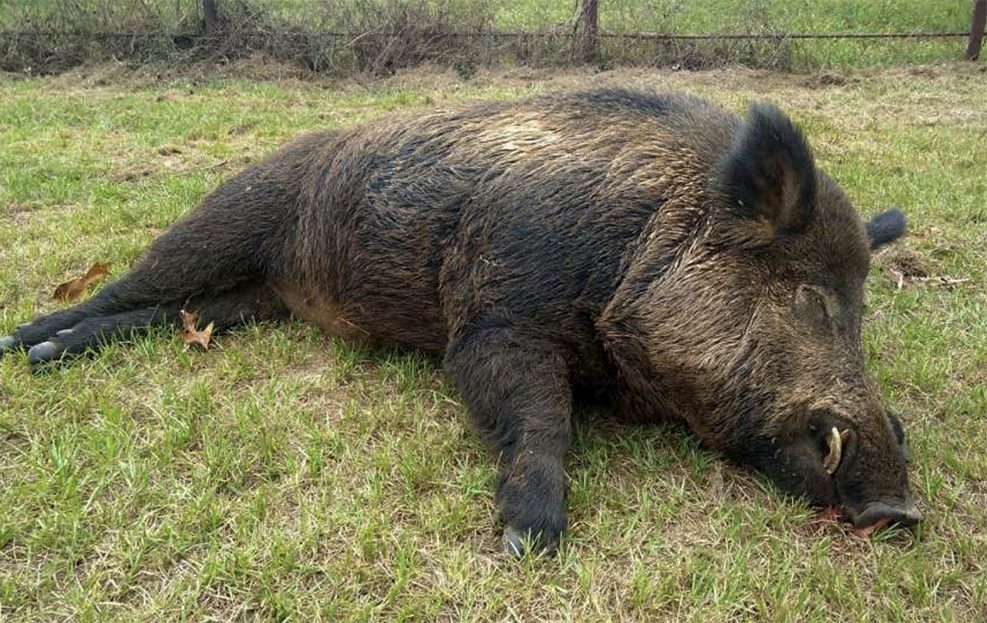 Wild pig hunting requires powerful bullets to pull off a clean kill so you’ll want to use something above .308. However, boars that weigh over 300 lbs will require that you use bigger bullets primarily because they have thick skin around the chest area. That said a skilled shooter could get away with using smaller bullets and aiming for the head or other vulnerable areas.

You also need to take into account the fact that wild pigs can go berserk when wounded so you’ll want to kill them ideally with a single shot. When bowhunting a similar rule applies, you’ll want to use heavier arrows than what is normally used to hunt deer.

Now that we’ve decided on the ammunition its time to discuss the best weapons for hunting pigs.

Now, this is the weapon of choice for many pig hunters because it looks great and does a fantastic job. While the .500 / 465 caliber shots may seem like overkill but it is great for putting large boars to sleep.

The drawback is the 10.3-pound weight which is larger than what many novices would be able to handle. However, it offers a firm grip. The wide V sight is another perk of this rifle since it improves shot accuracy exponentially.

When you’re out pig hunting, you’ll encounter animal of all sizes. While it is easier to put down sows with just about any lightweight bolt, the larger boars will require a broadhead like the Rage Extreme 2-Blade Broadhead. The extra 2.3 inches means that it weighs more than the regular size Broadhead, but that translates to more kinetic energy meaning more penetrating force for your arrows making them deadlier and fatal for larger hogs.

The Smith and Wesson .460VXR

Now for people who think that helicopter hunting with a rifle isn’t challenging enough, they can always try it with a handgun. Using a handgun will mean that you miss shots and requires a lot of practice, but we already warned you that it is a challenge.

However, if you’re going to take a revolver to a boar hunt, it should be big enough to take down the biggest beast, and that’s where the Smith and Wesson .460VXR shines. Weighing around 82 ounces makes it a bit heavy but when you’re out hunting that’s a good thing because a lighter revolver would be difficult to handle. Not to mention that it looks good too!

When it comes to boar hunting the Blaser R8 is the weapon of choice for Europeans and now an increasing number of seasoned American hunters. The beauty of the Blaser R8 is that it offers all the accuracy associated with a bolt action gun but with a straight pull design. So, it is much quicker to shoot than a regular bolt action rifle. The Blaser is safe to use, fast and highly accurate making it the weapon of choice for both newbie hunters and seasoned experts alike.

Above are just a couple of weapons you can use to down large hogs on your next wild pig hunting trip. That said regardless of the weapon you choose just make sure that you practice on the range for a few hours before taking it into the field. Our personal favorite is a customized AR-15 with a scope.  These work great when you are hunting wild boar from a helicopter.