Have You Ever Gone Helicopter Hog Hunting?

Have you ever done helicopter hog hunting? There’s nothing quite like buzzing over droves of hogs from only a few dozen feet above, speeding along at interstate speeds while cutting loose with your itchy trigger finger.

If you’ve done it before, then you know just how exciting it is. It’s certainly not a single-day experience either. Most helicopter hog hunting around the Austin, TX area actually starts in practice the day before. Before you can hunt from a helicopter, you have to go through a rigorous safety course where you learn the methods and techniques of safe firearms operation in terms of being in an aircraft.

The actual hunt time will vary based on local conditions and the outfitter you’re with, but most prefer getting their helicopter in the air before dawn. This is when feral hogs, also known as wild boards, least expect to be hit with bullets from above. Experienced pilots have a good idea of where to find these nuisance animals and will cruise you right over them on wide swaths of acreage where this kind of hunting is both legal by the government and approved by landowners.

The fun and adventure can last all day or night, too, as many outfitters have customized fuel trailers that enable mobile refueling quickly at most hunt locations. Your helicopter’s engines stay warm, and you spend more time flying.

For even more fun, many outfitters have you stay in a comfortable and fully stocked ranch house. Here, you can rest and organize the details of your hunting, but you can also enjoy Southern hospitality, while also partaking in activities like fishing and skeet shooting. 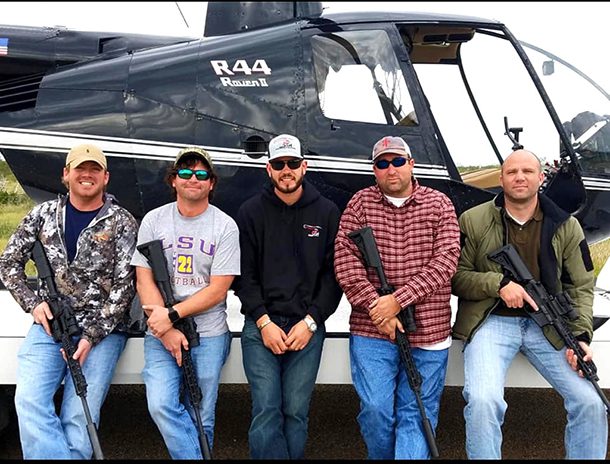 The rise in Popularity of Helicopter Hog Hunting

Helicopter hog hunting grew a lot as an industry in the state of Texas in particular thanks to HB 716 getting passed. This lets tour operators offer local citizens, out-of-state guests, and even international visitors the option to hunt and even kill feral hogs or wild boars from on-board a helicopter. These wild animals are a known threat to the local environment, and you can help in preserving the beauty of the state or area you get to fly over. Having said that, keep in mind that most hunting takes place overactive ranches and farms, not wildlands. As such, respect must be paid to the citizens, land, and property in everything that you do.

While regulations vary in each state that permits helicopter hog hunting, having a valid hunting license is typically mandatory. In many cases, this license is different from the license necessary for hunting deer or birds or going fishing. Fortunately, you can usually get your license online and bring it with you. No reputable carrier is going to let you fly without it.

Whether you call them wild boars or feral hogs, they’re not a native species to most areas they plague. This invasive species is a current and high-level threat to many acres of land, including the goods produced or crops grown therein. This is why curtailing the population is permitted. Many find it fun to do, but it’s also quite necessary.

The gestation period of most feral hogs is only 115 days. Compounding matters is the fact that they hit sexual maturity in only half a year. Most regions lack natural predators to keep the species in check, and the population has the capacity to triple in size in less than 18 months. Given the sheer impossibility of eradicating them, every effort is necessary to protect the agriculture and native wildlife of the region.

At the time of writing, Texas alone had more than 4 million wild hogs running around, directly competing with native wildlife, including endangered species, for both habitat and resources. Bird populations that nest on the ground are at particularly high risk. Feral hogs over-forage, which destroys ecosystems, upsets stream and creek beds due to wallowing and rooting, and even destabilize the soil in many wetland areas. Annual crop losses alone frequently top $1 billion USD. 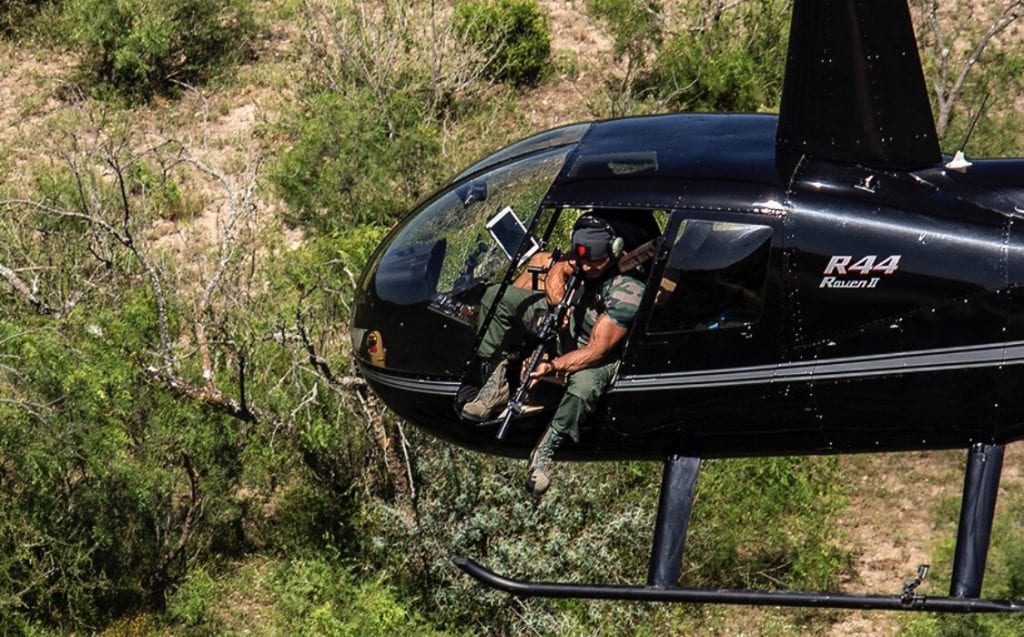 Prior to HB 716, or the Texas Hog Depredation Act, population control was just left to ground trappers and hunters. However, research shows that three-quarters of the hog population needs to be wiped out on an annual basis just to keep the current population level in check.

HB 716 permitted landowners the right to offset financial losses hogs cause by allowing the inflow of hunting tourism dollars, which is where helicopter hog hunting comes into play.

Over two-thirds of Texas property owners have at least considered allowing aerial depredation above their lands. Hunters love it because ground hunting or trapping means risking direct contact with wild boars. They have long, sharp tusks, the safety of packs, and frequently little to no fear of humans on the ground. However, they also commonly carry Swing Brucellosis, which turns into a herpes virus known as Pseudorabies in people. Helicopter hunters are at no risk of this.

You don’t even need your guns or ammunition. In fact, due to safety and insurance regulations, most operators won’t even let you use them if you do bring them. You’ll be given a very reliable weapon and lots of bullets. You’ll likely be cradling a semi-automatic AR-15 in your arms, although some package upgrades let you use a fully automatic. In either case, the weapons are fully outfitted, and you get training in their proper use.

This isn’t a traditional sport hunt, however. The whole purpose is keeping the property, people, and the environment safe. That means that you’re likely only going to be able to shoot feral hogs, although in some cases coyote can be shot at too.

In some cases, it’s possible for the provider to get some hogs together for a trophy picture, though. In other cases, hogs might be inaccessible due to their placement in crops or where ground crews can’t get them. Hogs are typically left to be vulture food. Nature usually takes care of dead hogs within just four days, and sometimes overnight.

Given how this is a population containment program and not traditional hunting, there is no set season. You can enjoy helicopter hog hunting around Dallas, TX any month of the year. Having said that, weather can always be unpredictable, and flights do not take place in substandard or dangerous conditions.